Vico del Gargano is a village and comune in the province of Foggia in the Apulia region of southeast Italy. Called the “Village of Love”, is part of the Gargano National Park and the Mountain Community of Gargano. 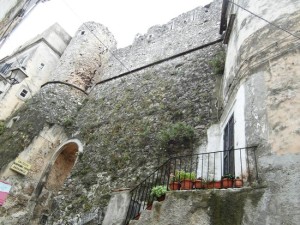 In the four-sided shape of the castle architectural modules highlight different times, functions and artistic cultures that follow, from the Normans to the Aragoneses. Grounds of defense are the basis of the first plant of the complex, in the Swabian age takes the ideals of a residential domus solaciorum, a mansion for the entertainment of courtiers and perhaps even of the emperor Frederick II. These, in 1234, had given a dowry to his third wife, Isabel of Aragon, Vico and the countries Gargano included in the Honor Montis Sancti Angeli. The oldest part of the castle develops on the axis NE-SE, closed at the corners with square towers.

That of NE elevates on a basic shoe block shaped and chamfered, as evidenced by a ridge in a string-course; the other SE culminates with an elegant mullioned window, described by A. Haseloff (“a capital with flat leaves and large bulbs oblique”), and with the original battlements. As if to reinforce this slender angular structure, a circular bastion fortification, the so-called main tower, reminiscent of the Aragonese period. And adaptations to fire mouths, alongside the archer, back to the recurring drama of war, siege and shelling of Vico in 1529 by the Spanish.

In everyday Today the castle remains a symbol, dominating the urban composition of the country. Walls encrusted with history, vaults, portals still defy time and retain the secret of events that no archive has collected. 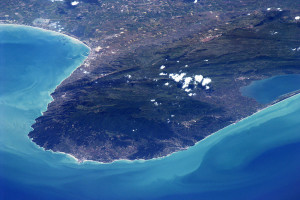 Gargano is a historical and geographical sub-region in the province of Foggia, Apulia, southeast Italy, consisting of a wide isolated mountain massif made of highland and several peaks and forming the backbone of the Gargano Promontory projecting into the Adriatic Sea, the “spur” on the Italian “boot”. The high point is Monte Calvo at 1,065 m (3,494 ft). Most of the upland area, about 1,200 km2 (460 sq mi), is part of the Gargano National Park, founded in 1991. It is within the Italian Province of Foggia.

The coast of Gargano houses numerous beaches and tourist facilities, including resorts such as Vieste, Peschici and Mattinata. The two major salt lakes of Lesina and Varano are located in the northern part of the peninsula. Monte Gargano is the site of the oldest shrine in Western Europe dedicated to the archangel Michael, Monte Sant’Angelo sul Gargano.

Other tourist attractions include the cathedral, the episcopal palace, the Abbey of Santa Maria of Ripalta and the volcanic rocks dating back to the Triassic Period, known as “Black Stones”, as well as the Sanctuary of San Nazario.